We did a little update on the lighting system of the game. It been a while since we wanted to do the switch but we never had the time to do it. We have been invited to present our game at a local festival this weekend so we took the time to update the lighting before the presentation. 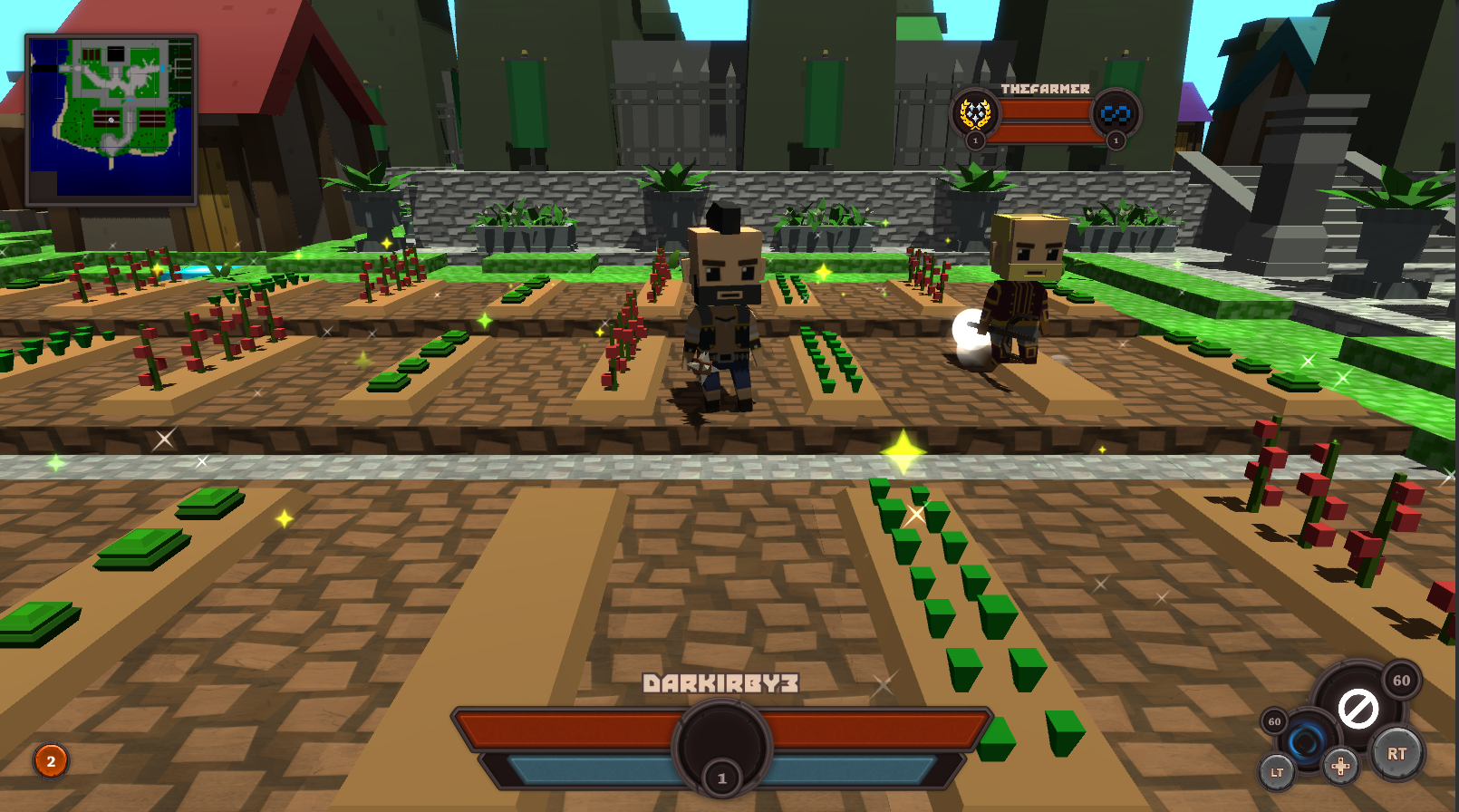 So like you can see it's a great improvement. There is still some work to do but for the moment we are really pleased with the result.

-Bumpmap was not really visible before. Now you can see it on the ground.
-The camera can now use hdr color.
-Emission texture can now affect the bloom effect creating glowing things.
-Skybox was added.
-Fog system limiting the visibility.

Since we are in still the basic development of the game. We didn't start yet optimising it. So to cheat in time and effort until we got a playable build we reduced the amount of chunk visible by the player.

It's a easy and lazy trick we did but when we can we would like to give a good amount of chunk visibility to the player so people can admire the view and the world in front of them. Also we don't know yet how the server will end up with more then 100 active player on one single map so we prefer keeping the amount of visibility low and if everything go as planned we will give a lot more. We might also make the chunk visibility a setting directly inside the client so bad computer can limit their view distance to run faster.

One of the main problem about having a low amount of chunk visibility is that the player could see in front of is eye every chunk loading in his face. So that foggy thing make it a little more subtle for the player. You can still see it but it's a lot more discreet.

Minecraft used the same trick to hide his own chunk system. We are not yet satisfied with the way our fog work. Right now the fog is linear but we would like to give it a beautiful curve. This way there will be less fog near the camera and far more at the background of the render distance but for the moment this will do the job just right.

Here's an example of the fog visibility.


When Should the game be up and running ?


Well we plan to release a playable build / early access in november 2018. We have in november an exposition called the Migs here in montreal.

This is our best chance for us to show the game to publishers and investors. So if we succeed to stick to the plan we might get a playable version in 2018.

It's highly possible we get a private alpha open before. Since we are still building the core mechanics of the game we don't have much gameplay to offer to those who would like to simply play.

We are doing and undoing a lot of work and components since we are also testing how the game feel and behave with new ideas implemented. Some of the new implementation cause conflict with old components that are ok for making the game run but became quickly old and annoying when you start truly playing with the game.

Example, we have an awesome npc system where you program your own npc that can mine and produce resources. This is without a doubt a fun system to program and a highly effective one. But this became a serious problem for the economy of the server. With our previous minecraft server the main problem for the economy was inflation. If we calculated a normal player could physically cut 30 log into 5 min. We would try to achieve a time/money ratio. For example 5 min = 300$. It gave us an easy rule to regulate other jobs and determine how much time it required before the player can get his first city.

The main problem with our previous minecraft server was when hacker would cheat in time what was physically possible. Once you hacked your client you could double or triple the amount of log cut in 5 min. Making a lot more money than normal minecrafter and making you a lot richer faster. So to avoid that since we couldn't change the core of minecraft we would make it even more expensive to buy the upgrade or give less money while cutting wood making the gameplay a lot more painful and boring for normal players. This was a serious issue on citywars minecraft and we would like to avoid this on Citywars Savage. I spent countless night being invisible in minecraft watching and silently studying hacker finding new way to get effectively their resource. When someone would find an alarming and too profitable way to make money we had to intervene and find a new way to limit and block the progression of the player making the game way harder for normal player.

Since technically the blueprints will be the most efficient way to get your resource it will be a lot easier for us to calculate and qualibrate our economy in function of what can achieve an army of blueprints npcs.

Except those npcs are really really effective... Like way to much effective XD They can extract resource non-stop during 24h without any break. 30 000 logs is a lot of wood. That makes a huge challenge to calibrate the inflation of the server. We can't simply make everything more expensive to compensate the huge amount of resources in circulation. Because crafting a stick would require 5 000 logs. it's not really friendly user for beginners and definitively not a good solution. We need a way to make a great progression for the player.

You can't 100% control what people will do or invent to find more effective way to play your game. Since with minecraft we couldn't fix the core of the problem by changing the way things work our solution was limiting the player and I think it was a bad way of fighting this problem. I would prefer for our game since we have more control over what the player can do and cannot do, to simply give more tools to the player. Better way for the player to express his creativity and fixing his problem of crafting resources from tools inside the game and not having to install third party hacks to fix this issue. I wouldn't like to not have to create an arms race versus modders to prevent them from hacking my game. I would like to embrace their idea and concept for the game and use it to make the game better.

I remember staff being completely crazy about hackers. In reality the difference between modder and hacker is really really thin. Any modification to your client could give you any kind of advantage from other vanilla client. Some would install client that allow you to instantly kill everyone. Other would install client that allow you to gain more fps on your shitty computer. For the community morally one is considered bad and the other is considered right. In reality the 2 of them give you advantage over regular vanila player. People would like to draw a define line of what is right and what is wrong but the reality is way more complex and blurred.

Factorio is a beautiful example of why i love this game so much. People wouldn't really hack factorio. Maybe for some teleportation hack and wall clip but in reality the game give you all the tool you need to build and extend your efficacity to 1000% Installing a hack for factorio would be quite pointless in term of construction. In this game you start really simple. Mining your resource by hand but quickly the gameplay evolve in a way that you don't need to waste your time doing simple boring stuff. At the end of the game you can build an entire base with a simple click. The game is built in a way to offer you all the tools needed to be the most effective and that is what I would like with Citywars Savage. Not sure if we will succeed this concept in an rpg but this is something I would really like to achieve.

So we are developing a new idea that would counter and might fix the problem by implementing a skill tree system. I should post more about it this week if we have enough time to complete it. Stay tuned.